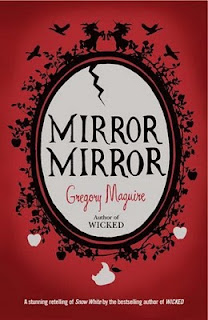 Bianca de Nevada lives happily with her father Don Vincente. Too young to really notice her loneliness she is content with the company of her father, the cook and the priest. One day that happiness is taken from her. Lucrezia Borgia and her brother Cesare arrive and send her father on a fools quest. With little choice he leaves Bianca in the care of Lucrezia. The cook and the priest protect Bianca as much as they can but Lucrezia soon begins to notice her beauty and her brother's attractions to it. So she sends her off to be murdered in the woods.

First of all this was another attempt of mine to enjoy Gregory Maguire. I loved "Wicked" (I read it before it became a famed musical) and also loved "Confessions of an Ugly Stepsister". When I read these I was intrigued by authors taking fairy tales and turning them into their own story. These were just a few of the books I read at that time but they were the most memorable. A few years ago I then read "Son Of A Witch" and I can't even describe to you how disappointed I was. It was one of the most boring books I have ever read. It had none of the magic or intrigue of "Wicked" although it seemed to try. I persevered with it to the end hoping for a glimour of what made "Wicked" so wonderful. It didn't happen. I then read "A Lion Among Men" still looking for that specialness and once again I was disappointed. Another boring read and a few hours of my life I won't get back again. It had such promise too. I picked up "Mirror, Mirror" with little doubt I would be disappointed again but with a need to try anyway.

I needn't have worried. Whilst not as complex as "Wicked" it has managed to restore my faith in the author. The story is virtually identical to the original fairytale but with added detail. It's the detail I love. Instead of a wicked stepmother we have a wicked guardian. A women concerned only with her own ambitions and self.

The woman in question is actually a real figure in history. The illegitimate daughter of Pope Alexander VI and sister to Cesare (also featured in the book) who was used as an example in Machiavelli's "The Prince".

There is some magic to the story as the original. The mirror is enchanted but not in the way of the original tale. The dwarfs are themselves magical creatures who seem concerned only that the mirror they made be returned to them. As for Bianca, she does have the features of snow white but comes across as a normal child who is the victim of circumstance. Her poor father breaks his heart as he leaves her and wants nothing more than to return to her.

The book is well written as I think all of Maguire's books are (despite not liking two of them). It's mainly written from the perspectives of Bianca, her father, the dwarfs and Lucrezia which gives you more insight into the entire story had it only just been from the one.

I loved it for it's Italian setting, historical aspect and it's magic. More, I loved it for allowing me to rediscover an author I once very much enjoyed.
Posted by KarenSi at 13:24