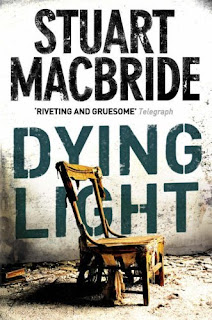 Logan MacRae is in trouble. His last op went completely wrong. Not only was there no stolen goods as his tip promised but someone under his team ended up shot and is now dying. As a result MacRae has been removed from his usual team and placed with the rest of the screw ups under DI Steel. Now he has Steel on his back constantly as he is the only one on the team she can rely on not to mess up everything he touches. There is a prostitute killer on the loose and this falls into the hands of Steel and his team. Logan has to catch him quickly so that Steel can move on up out of screw up squad. He just hopes she will take him with her. Meanwhile his old boss DI Insch is investigating a pyromaniac who locks people in their homes before petrol bombing it. MacRae lends a hand with the case in the hopes that it will get him away from Steel.

The story seemed to be a little slow moving compared to "Cold Granite" yet there was a lot more going on. Logan is working two cases which could get confusing but surprisingly doesn't. Actually, I was glad because I would have missed DI Insch constantly filling his face with sweets and using them as rewards when one of his PCs gets something right. Both cases are so completely different that it's easy to keep them apart. At one point I thought it was going to turn out that both cases were in some way going to be part of a bigger crime (Deaver does this a lot) but turns out not to be the case. I think I would have been disappointed if it had been.

The relationship between MacRae and Steel is very different from MacRae and Insch. Steel doesn't do anything by the book. She just wants to solve the murder and move on even if the facts don't quite fit. This frustrated MacRae and he believes that she's going to bring him down with her. Steel also doesn't like it when he goes and does his own investigating without informing her which he believes is so she can take credit. The constant logger heads leads to a lot of humour. Mainly sarcasm. Like most Scot's I love sarcasm and Scot's can do sarcasm well. I had planned on a few quotes to show what I mean but Scot's also love their profanities and the humour was filled with them.

The humour is the first reason why I love these books but the second reason is that Logan MacRae is human. I am sure I mentioned this in my review of the first book. He is likeable and his bosses, for the most part, like and respect him. He's good at his job and seems to have a nack for putting things together. He isn't perfect though. He manages to offend the wrong people, he struggles to keep his girlfriend happy, he messes up at least once or twice in a book and he is a champion sulker.

The pace of the book is the only thing that really let it down and I think that might have more to do with me than the book itself. Certainly was enjoyable (although a bit gruesome at times). It's only the author's second book and I can't wait to see what other problems Logan MacRae manages to create for himself.
Posted by KarenSi at 00:27