Into The Darkest Hour - Elizabeth Haynes 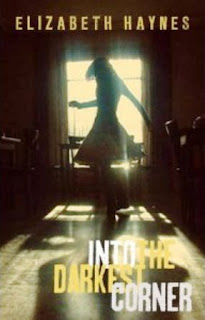 Cathy is 28 and suffers from severe OCD. It was brought on after being physically and mentally abused by her controlling boyfriend. He is now in prison and she is left to pick up the pieces of her life. Her entire routine is based around checks all to make sure she is safe and that he hasn't been in her flat even though she knows it's impossible. Anything new frightens her and some shocks and surprises bring on severe panic attacks. She has managed to hide this from everyone until a young man moves in upstairs who gives her the push she needs to seek help.

This generally isn't a book I would pick up. It was suggested for my book group by my friend which is the only reason I gave it a shot. I am glad I did as I loved this book. I became emotionally involved very quickly. The story alternates between two time lines. You see both the start and end of the abuse and then four years later as she tries to keep her life together. I think this is what I loved about the book. At the age of 24 Cathy loves life. There isn't a night when she isn't out and her friends are the most important thing in her life. She loves to flirt and just loves life in general. You then flash to her life now. She has no social life. Her clothes are all practical. She has cut herself off from all her friends and she spends her time feeling anxious and frightened on a good day.

As Cathy starts on the road to recovery with the help of Stuart you see how her boyfriend Lee slowly began to control her life and how she was stuck there. You understand how her OCD has manifested itself with all the mind control games Lee played on her. Cleverly done I thought and this split time line allows you to feel more sympathy for the main character as well as gain more understanding.

This was meant to be my travel book whilst I read The Passage at home. I got to a certain point though where I had to keep reading (was up to 3am last night finishing it). It was difficult to read about the physical abuse but I had to keep going. I had to know that the character survived and that Lee didn't win (he is released from prison about half way through the book). I have a few friends who have some mental health issues (mainly severe depression) and felt that it gave a good understanding into it. I think the author certainly did her homework there.

Another reason I liked it is that Cathy has her flaws even from the start. Her life before was almost frivolous and she and her friends could be a little catty at times. After the events she could be a little stroppy and didn't always like to protected. A good thing I think as it meant that she wanted to get better for herself and not just because the lovely man upstairs was helping her.

One thing that bothered me (which always bothers me in books) is how easy it was for Cathy and Stuart to fall in love. He is a Dr who specialises with mental health problems, depression in particular. He deals with people who have Cathy's problems all the time and he doesn't want to treat Cathy as he likes her. Fair enough but all they talk about is her OCD. Cathy is still recovering from the trauma of her last relationship and Stuart himself had his heart broken. Both want to take it slow and yet that is eventually out the window. Don't get me wrong, despite the fact that I don't have a romantic bone in my body I was routing for them it just niggled at me a little.

A great book but I think there are a lot of people out there who would be unable to read the scenes of domestic violence which could be quite horrific.
Posted by KarenSi at 03:34