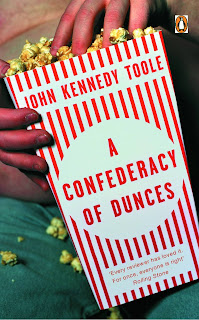 Ignatius J. Reilly is a highly educated genius who is completely unappreciated by the world around him. He is forced to live life putting up with the deviates around him as he tries to educate them all. He spends his days locked in his room writing his tablets. Then his mother decides that he needs to finally get a job at the age of 30. Out on the work force he creates disaster wherever he goes. Finally landing a job as a hot dog vendor he decides to use that opportunity to put the world to rights as the rest of New Orleans looks on in horror and amusement.

Ingatius is one of the most repulsive and irritating characters I have ever come across which I think is saying something. When I first started reading the book I thought I was going to hate it. I couldn't look away and eventually I got over how disgusting he is and actually found myself giggling. One of my particular favourites is when he tried to organise the gay political party believing that they should take over world in order to create world peace. World leaders would be too busy coming together over musicals and costume parties to be at war. Funnily enough it doesn't quite go as planned.

At one point he suggests some back ground reading. It's important to study history although he tells the individual to ignore the Renaissance and the Enlightenment as he describes it as "dangerous propaganda." What tickled me though was that for the contemporary period he recommended comics especially Batman.

The rest of the characters are just as absurd as Ignatius although not quite as entertaining. There is his poor mother who finally gets a life for herself away from her son although it does lead to her believing that Ignatius needs a padded cell. She's also a bit of a drinker which is constantly mentioned through out but with a son like that who can blame her. Then there is Myrna, Ignatius' rival and trouble maker who is just as bad as he is. I wish there had been more scene's with her but the letter writing was funny as was Ignatius' reaction to them. Then there was Miss Trixie, Mrs Levy and Lena Lee. My favourite though was Patrolman Mancusa who as a form of punishment is forced to patrol the streets in different disguises until he arrests someone suspicious.

In the end I surprised myself by loving the book. I though it was extremely funny although it felt more like I was laughing at these characters than laughing with.
Posted by KarenSi at 00:42