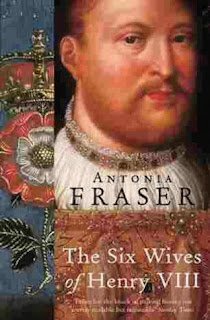 It really is what it says on the tin. A history of the six wives of Henry VIII. Funnily enough it begins with Catherine of Aragon and her betrothal to Henry's brother, Arthur. It ends not with Catherine Parr (Henry's last wife) but with the death of Anna of Cleve's (Henry's fourth wife) who survived them all by about 10 years. This has been sitting on my tbr pile for about 6 months. I picked it up whilst reading a book on Mary Queen of Scots (also by Fraser).

A few weeks ago I watched the second season of the Tudors which is a guilty pleasure of mine. To wash away the dirty taint of guilt I decided to read this. It's well written and engaging. It's not one of those history books that seems like a chore to read. The focus is on his wives but much of Henry himself is in this book. You can't really talk about the wives without also talking about Henry. I read a book not that long ago about him (only a brief history) and I came away disgusted. It depicted him as a selfish spoiled brat of a man who is prone to tantrums when he doesn't get his own way. I still think he was those things but thanks to this book I also think he was more than that. I gained more sympathy for the man who lived in the shadow of his father. The bulk of the book is focused on his first wife, Catherine of Aragon. Not surprising considering she moved to England to marry Arthur at age 15 then married Henry in her early twenties. They were then married for 24 years before Henry was able to have the marriage annulled and marry Anne Boleyn. His marriage to the rest of his wives total just over 10 years.

It also may surprise most people that much of that first marriage was a happy one. The reason for Henry's unhappiness was biology. The inability to produce a son. The need of an heir was an obsession for Henry (as I am sure it was for many monarchs during this time) and he blamed his wives for not producing one. The book is extremely sympathetic to the wives. Fraser is famous for this sympathy and I felt it was almost biased when reading "Mary Queen of Scots". In this case though she did show the faults of all the wives but still put them across as victims, which they were. As well as sympathy for the wives I felt very sorry for Mary and Elizabeth who were made illegitimate by their own father (despite him showing affection for them). There was even sympathy for Cromwell who is notoriously depicted as a vile character. Not so here, instead he is shown as a true servant of the King.

I could go on and recount everything about this book I found interesting. Needless to say I now want to read more on Mary, Elizabeth and Cromwell. I do have a book on Mary somewhere so after a break I think that will be my next non fiction book.
Posted by KarenSi at 01:17