I Can See You - Karen Rose 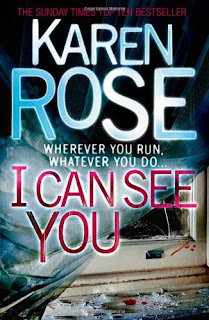 Eve has been damaged in the past and is determined to put that hurt to good. As a psychology student she is doing a study into online gaming and trying to find a way that would give victims a way to feel safe in the real world. Somehow she has gotten hold of her participant list and this could not only get her expelled but black listed too. One of the participants though has committed suicide and she wonders if it has anything to do with her high volume of hours spent in the virtual world. She tried to tell her mentor who ignores it. When another woman dies in the same way and is believed to now have been murdered Eve has now choice but to go to the police. Detective Noah Webster is the first of the Hats to realise theses suicides are the work of one sick individual. Noah is in love with Eve and this murder has brought him together. As the killer works his way through Eve's list it's clear that Eve is also a target. Noah is determined that he won't lose someone else he cares about and races to catch the killer.

This is probably the easiest read I have had in a long time and was exactly what I needed. Not a lot of thinking had to go into it at all. About five years ago I would have turned my nose up at the type of book too. Glad I got over it. The crime side of the story was fairly interesting. A serial killer (it's always a serial killer isn't it?) wants to be finally noticed and get his revenge on the group of detectives known as the Hats. There is a growing trend in crime books for the criminals to use technology. Jeffery Deaver has used it a few times and now Karen Rose. It always makes for an interesting premise I think. In this case the killer is stocking his victims on and online game. A game that's supposed to be anonymous which makes finding the killer difficult. It wasn't hard though to work out who it was as the killer had to have some kind of inside knowledge (I'm honestly not giving anything away with that one).

I did have a chuckle at the hat squad. I couldn't help it. The idea that detectives receive and wear a hat after solving their first case just seemed very old fashioned. Do people wear these hats other than in the old black and white movies. I had to take back that laugh though when I read that this team of detectives is actually based on a real life team who do that. I probably shouldn't make fun of something that is probably a good team building exercise and brings the team closer together.

I also couldn't let this book go without commenting on the romance. As you know I am not a romance fan. I don't go out of my way to read it. This author is described as a romance-suspense writer so I shouldn't really be surprised when there is quite a bit of it in the book. I wasn't ignorant of it either when I picked it up. The friends who convinced me to read this book did warn me. I have to say it didn't actually bother me too much. I still preferred the crime side of the book but I could live with it. That doesn't mean that I have changed my mind about romance books in general.

Not my favourite book in the world but it was mildly entertaining and what I needed at the time. Perfect for anyone who wants a light crime book and a touch of romance. These books are all connected in some way so I will probably go back to the beginning and read the others.
Posted by KarenSi at 01:52