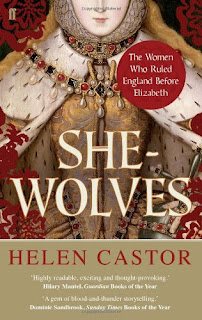 This is a history book which describes the women who set the path that allowed Mary and then Elizabeth to take the thrown. In France the law was set so that women could not inherit the throne. However, four women in England set precedent so that the same law could not be enforced in England. Matilda, granddaughter of William the Conqueror, was the first female to fight for her right to rule as her father's only living heir. Eleanor of Aquitaine rose up against her husband and fought to rule on behalf of her sons. Isabella rose up to free England from the tyrannical rule of her husband. Margaret of Anjou fought to rule on behalf of a husband who could not. Then we get to Mary Tudor. She had to fight for her right to the throne too and for the first time being female did not go against her. This then led to Elizabeth taking her rightful place as Queen easily.

This is one of the best history books I have read in a long time. Also the best book about historical Royals. The book is only 450 pages long and yet so much is packed in. In each section I didn't feel like areas of these women's lives were being glossed over. We got to hear about what brought them to England's Royal house in the first place and then details of  how they fought to rule. It was all extremely interesting. Each section covered and era I knew very little of or absolutely nothing of. I am definitely going to go back and read more on most of these eras.

Eleanor of Aquitaine interested me in particular. I had heard of her but I knew absolutely nothing about her. She was a controversial figure even before she reached England. Once married to the King of France she managed to get him agree to divorce despite the fact that he loved her. Eight weeks later she was married to Matilda's son Henry II. I found it interesting too that the legend of Robin hood was a result of her younger son John. I am sure there are a few books on her which I will have to invest in at some point.

This isn't a book about feminism in history. It's simply a historical look at why Mary and Elizabeth were able to take the thrown when other countries wouldn't have allowed it. It doesn't portray these women as angels either. They have their good points and their bad. You just need to read the section on Isabella who was no saint. Ironically she became the embodiment of what she had been fighting against. Oh, and that section is good just to prove how inaccurate the film Braveheart actually is. Yes, she is that Isabella (sorry, pet peeve).

If you like history then I think you will like this. It covers several periods and isn't at all dry.
Posted by KarenSi at 03:33