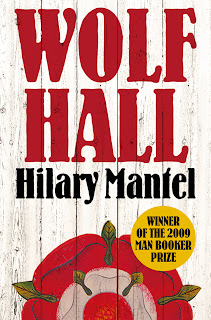 Bring Up the Bodies by Hilary Mantel published May 2012.

This obviously isn't the image for Bring Up the Bodies. There isn't on yet. In fact the title of the second book was only announced this week. I read this book before I started this blog. Which is a shame because it means I haven't shared with you how amazing this book actually is. If you love historical fiction then I have no doubt that you will enjoy this. For those of you who don't know the book is written from the point of Thomas Cromwell, a controversial adviser to Henry VIII. He has often been portrayed as a rather dark character. One who uses situations for his own political gain and is blamed for the downfall of Anne Boleyn. This book instead gives a more sympathetic view of Cromwell. He is seen as a family man who hasn't had the best start in life and is now just trying to do what is best for his family and his King. He is more a victim of circumstance. It's a rather large book and the writing style felt a little strange at first but I soon was caught up in the story and quickly devoured it. I have enjoyed Booker Prize winners in the past but this is the first time I have felt the need to rave about one. It was also the first historical fiction that I had read. A new genre for me to explore.

Enough raving about the first book. As I said the title of the second book was announced this week. I knew that there was going to be a sequel due to the way Wolf Hall ended. It was set up so that the second book would be about the downfall of Anne Boleyn. What I didn't know was that it is going to be a trilogy. I read an article in the guardian this week which said that the author had decided that when writing Bring Up the Bodies that she felt that it needed a third book. Very excited about that and I really can't wait for the publication of Bring Up the Bodies.