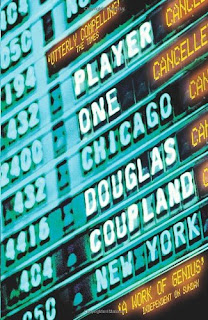 Four people separately find their way to a cocktail bar at Toronto airport.  All four are there for various reason. All four are waiting for their lives to change. Karen is there to meet someone after years of being alone. Rick is the bar man. He is waiting for his life to start over again. Luke has run away from his old life and picked the bar at random. Rachel is there to prove to her family that she is human after all. Their lives do change but not in a way they could ever predict or expect. The fuel crisis hits and all four are stranded as the world outside starts to riot.

I found this to be a very easy read. I was able to read it in a day and still got some studying done. It actually take me back to early Coupland because I did the same with most of those books too. The plot is a little unrealistic. I remember someone saying in a review that they felt that there would be a little more warning when we do run out of fuel. Fuel saving strategies would probably have kicked in on the lead up. I have to say that I agree. However, unrealistic isn't unusual for Coupland. One of my favourites, "All Families Are Psychotic" also had an unlikely scenario and I still loved it. As did "Girlfriend In A Coma".

In the end the fuel crisis was actually only background noise. A way for these characters to come together and to change each others lives. The story of each character was key to the plot. They each represent the everyday in some way. Each of them have everyday problems too. Essentially they are all lonely and are trying to find a way to break down that loneliness. The disaster gives them that chance to discover themselves and each other.

There really isn't much  more I can say about the book other than I very much liked it. Reading it I felt that Coupland was going back to his writing before Jpod. It's the first one he has published since then that I haven't been mildly disappointed with. Overall a good read.
Posted by KarenSi at 01:14