I didn't do one of these last month but have decided not to do two months in one. To be honest I didn't have that much to share from September. It was a fairly quiet month reading wise. October was fairly quiet too mind you but I still have more to share.

First of all I decided to stop taking part in the 'Books I Should Have Read By Now' challenge. True I only had six books to go from my original list but I decided that if I only got to read three books in one month I would rather it was something that I really wanted to read and not just a book that has been collecting dust on my shelf. Plus, half way through October I decided I wanted to have some Halloween reads and I knew there was no chance that I could do both. I still think I did well in taking part though and here are the books I did manage to pull down off that dusty shelf and finish;

I think 12 is a respectable try. I have managed to make my tbr pile grow back again in the last few months but I made a good dent in some of the older books sitting there. My least favourite was Hard Times by Charles Dickens. A little sad that it's the classic. I think disappointment put it at the bottom as I normally love Dickens and this was the first book I read by him that I didn't like. The favourite is actually harder to choose.  I probably got the most out of Shantaram by Gregory David Roberts. I also read it as part of a readalong and had some fantastic discussions as a result. King, Mitchell, Roth and Martin are up there with it though. 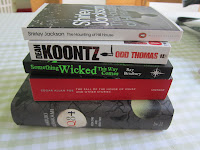 Being October I decided to read some scary books and I looked for suggestions from other bloggers and friends. This is only the second year I have done this although I used to devour the horror section. Here is what I picked out from all the ones I was recommended;

Whilst not the scariest books I have ever read I did enjoy them for the most part. Odd Thomas may have disappointed me in plot but I did love the character. The Haunting of Hill House was a pleasant surprise. However, my favourite was the Ray Bradbury. Extremely creepy with a fantastic range of characters and beautifully written. I'm not really surprised by that mind you, I have always enjoyed Bradbury.

So this month I managed to read;

My classic choice was my favourite this time. I loved The Woman In White. Full of suspense and a great detective story. My least favourite was An Idiot Abroad. It just wasn't as funny as I was hoping it would be.

I actually don't have my books planned out for the month ahead. I am probably going to read "A Tale of Two Cities" by Charles Dickens for my classic of the month. It was originally on the challenge list but I was put off a little after the last Dickens. I have gotten over it now though and I am looking forward to it once again. Other than that I am just planning on enjoying the books I am reading now and will try my hardest not to buy any more. Speaking of which, I will have another What's Next post for you this week. It's been a while.

How has your reading month been? Any highlights? What do you have planned for November?
Posted by KarenSi at 01:01

Email ThisBlogThis!Share to TwitterShare to FacebookShare to Pinterest
Labels: Month Round Up