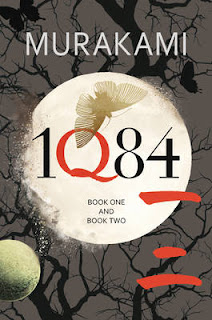 Aomame is a fitness instructor who specialises in the muscles. As the story begins she is on her way to assassinate someone. Tengo is a maths teacher who writes fiction in his spare time. He opens his story with a meeting with his editor as he tries to push forward an unusual piece of writing for a literary prize. As children they once recognised something of themselves in each other. Ever since they have never left each others thoughts although they never saw each other again. Events in both their current lives seem to be overlapping without them being aware. For Aomame it is the belief that she has entered  an alternate world that she calls 1Q84. For Tengo it begins when he decides to ghost write for a 17 year old.

That brief paragraph doesn't even begin to describe this book. Murakami's strength is surrealism and I think he surpassed himself here. Alternate worlds and mysterious figures are actually nothing new to him. Although some of his other books have been slightly more bizarre this really was something else. The surrealism started early with Aomame discovering that she was ignorant of some parts of recent history. Things that she is 100% sure she would have noticed. It's relatively mild at first though and picks up pace later on in the book.

As I said this isn't exactly new for Murakami. By book 2 however, it gets darker. I have read all of Murakami's books and never before have I sat on the edge as I waited to see what happens next. There is one chapter that this was particularly so. Of course the chapters alternate between Aomame and Tengo so I had to wait a whole other chapter to find out what happens. I have never had that experience when reading one of his books. It's the kind of thing that would make you stay up to the early hours just to get to the end.

One Critcisim of Murakami I have frequently seen is the slow pace of his books. I actually like that about them and I never feel that not much is happening. Instead I take the time to enjoy the writing style. I felt that I could take my time and appreciate it. It can be refreshing when you come across a book and you actually enjoy the slow pace. 1Q84 gave the impression that it was going to be this way too and so after the first chapter I settled in to that expectation. Of course, as I have already said, that changed in book 2. Since it was unexpected I was completely blown away by it. It's mainly for this reason that I would say it has overtaken Norwegian Wood on my list of favourites.

Don't get me wrong I think the characters are truly stereotypical for him. His writing didn't change that much. They are fairly likable and average for the most part. Sure they excel in things but in terms of personality they are average and it's another thing that I like about them. Even the quirky characters have that feel of every day about them (even when they are not every day. Perhaps because the characters don't see anything unusual in themselves and think of themselves as average). It's not a criticism and it's another reason why I love his work. Again with this book there was one difference and that was my reaction to them. Perhaps because I was so caught up in the second book but I really wanted everything to go right for them. I felt very strongly about that.

I really don't want to say too much about what happens within the book in general as I don't want to spoil any surprises for the reader. My recommendation is that you read the book. If you are new to Murakami though I would read some of his others first. Not because I think it's necessary to understand 1Q84. Really, it's because I would hate for anyone to read it and love it and then be disappointed with his back list after reading such a good book.

Of course I have yet to read the third book and I am not sure when I will get to do that (I haven't even picked it up yet). I am a little curious as the third one was translated by someone else. I wonder if that will affect the style. Definitely a worry and something to look out for.

Which brings me to another worry. How is Murakami going to surpass himself with his next book? I really don't see how that would be possible. I wonder if he will have set the bar too high with this one (in my opinion I think Douglas Coupland did that with Jpod). It will interesting to find out.
Posted by KarenSi at 23:17