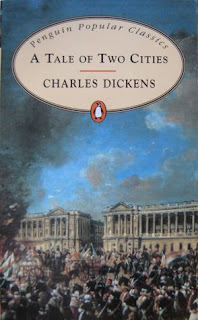 Sweet Lucie Manette and Mr Lorry travel to France in order to rescue her Father. Once believed to be dead he is now free in France after years of unlawful imprisonment. He is now a broken man and it's only the love of his daughter that can bring him back to a shadow of his former self. Back in England circumstances cause to men to fall in love with Lucie. Meanwhile France is in upheaval and is heading towards it's revolution. At the center is the man and wife who cared for Dr Manette until his daughter arrived. Lucie is now married and with her own little daughter but is somehow dragged into the center of events. It's only the love that these two men feel for her that will help save her and her family.

I think most of Dickens books are famous but this one is probably more famed. Mainly for it's opening line. How many of us could quote it without having ever read the book? I know I could. Despite that I was a little hesitant in reading it. I was so disappointed with Hard Times and I didn't want that same disappointment. I was worried that maybe Dickens had lost it's appeal for me. I have to admit that at first I thought that worry was going to come true.

The book has an exciting start. Mr Lorry is on his way to Paris by coach. There is already turmoil in France and each traveler is suspicious of the other and so keeps to themselves. Mr Lorry and Lucie then arrive at the wine shop of Defarge and his wife. Again there seems to be some tension amongst the people and Defarge is keen to show Dr Manette off to others. This then filters away to them being back in England and settled some years. The story slows down and there are hints of things within this section that seem to be unconnected to the story. It was with impatience that I read the scenes of Mr Cruncher and his family. All very interesting had it anything to do with the story itself. Plus it wasn't the only thing that didn't seem to connect.

In the third part things get interesting again. The tension in Paris has built up nicely with characters we already know at the center. As I said already Lucie and her family and friends are dragged into these events and the book really takes off. It's in the last 100 pages of the book that all these scenes that annoyed me now make sense. They are actually connected and it adds to the tension of the story. I probably shouldn't have been surprised as Dickens is well known for his coincidences in his tales. I happen to like that aspect of his writing and it certainly made this book exciting.

A Tale of Two Cities has not only revived my faith in Dickens it is now my favourite of his books. Looking through the list though it would seem that I have mainly read his later books. When I next plan to pick up one I think I will read an earlier book (possibly his first) as an interesting comparison.

This was my classic book of the month.
Posted by KarenSi at 07:24