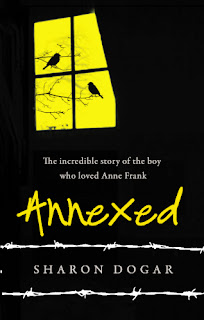 Peter Van Pels is dying in a German concentration camp. As he lies on his cot his mind wonders back to his time in the Annexe. In his mind he writes events as seen through his eyes and how he came to love Anne Frank.

One of my favourite books is the Diary Of Anne Frank. I read it in school originally. Since the teacher wasn't going fast enough for me (and I'm sure missing out chunks) I borrowed my parents copy and read it for myself. Conveniently that copy stayed in my possession and I have read it many times over the years. Even from a young age I found the story of Anne Frank inspiring and moving. So when I was asked by a friend to read this (she wanted my opinion) I jumped at the chance. What I didn't realise is that it would actually make me feel uncomfortable. At least the first half which is set in the Annexe did.

Anyone who has read the Diary has their own view of each of the people that were shut away together in hiding. What this book did though was try to change some of that. Auguste Van Pels became this sweet, motherly woman. Anne was loud, boisterous and irritating. I am sure each of these people did have some of the characteristics that this book claims they did but it felt too much like the author was putting words in their mouths and it didn't always fit. I think I didn't like the fact that it was tainting my image of them.

The second half of the book is set after they have been discovered and tells the story of them being sent to the camps. This half of the book felt like it could have come from anyone who went through the same experiences. In fact the author used the testimonies of several camp survivors to write this. It doesn't matter how many books you might read on the subject but it's always shocking to read detail of the inhumane things that were done to people in the camps. This book was no exception. I don't mind admitting that I did find myself in tears by the end.
Posted by KarenSi at 03:45