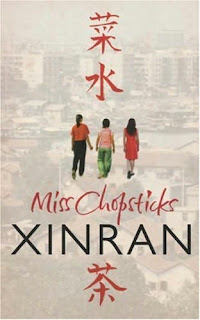 Three is the third daughter out of six. Her father believes that he is cursed for having no sons and decides to marry his daughters off the best he can. Three doesn't want this marriage and so runs off to the city with the help of her uncle. Her two younger sisters, Five and Six, soon follow her and they all find jobs in the big city and learn about the wider world in their own way.

This book almost reads like a fairy tale. Or as though the narrator was telling you a legend. It had that simplistic style. For this reason it was easy to mistake the book setting to be in the distant past. This was only made all the more so because you were seeing the world through the eyes of the three sisters. Coming from the country it's almost like they are from a different century. I found myself just as shocked as the sisters when someone begins using something like a mobile phone or talks about the Internet. I had to remind myself again and again that this book was set after the millennium and not two hundred years before.

My knowledge of China is poor. I have read maybe one other Chinese author. So I was also learning a little of China's Modern history along with the sisters. I found it to be interesting. I could feel the distress of the sisters as they tried to learn the ways of the city which was being engulfed in Western culture. They found it difficult as they were used to a life steeped in Chinese tradition. Not to say that all Western culture is bad. In fact Five loved it and wanted to travel to these mysterious Western countries.

It wasn't just about these three girls trying to make it in the modern world. When it came right down to it, it was really about three girls trying to prove their worth to their father. They wanted to show him that although they were girls he could still be proud of them. I had a soft spot for Five as she seemed to have the most to prove. Her father took her out of school after only a week believing she was too stupid to have this money spent on her education. Five believed it herself and yet she found that she had her own way of learning and became the most successful of the three sisters in picking up new skills.

I loved this book and actually found it a little sad. These three girls are actually based on the stories of women the author has met during her return visits to China. If you do read this I highly recommend that you read the background the author has written at the end. It was this that truly brought the book home to me.
Posted by KarenSi at 05:54