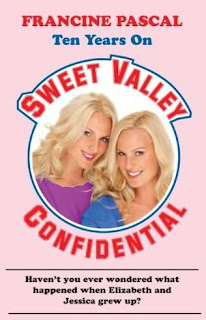 It's ten years after high school and a lot has changed. Elizabeth is now in New York writing for a start up magazine. Really she is hiding after her sister and ex boyfriend betrayed her. She's been in New York eight months and all she can think of is revenge. Meanwhile Jessica and Todd are just trying to hold things together back in Sweet Valley. Jessica loves Todd but is distraught over the thought of her sister never speaking to her again.

I had to! I LOVED these book back when I was in primary school. My best friend and I would devour them. I even read a few of the Sweet Valley University books. So as much as I am anti chick lit I had to pick this up and read it.

I managed it in a couple of hours, not that I expected it to be a complicated read. My reactions to it are a little mixed. There was very little of that nostalgia there. It was almost like that part was forced on you. The introduction of all those secondary characters we once knew and loved were awkwardly thrown in. This feeling was only enforced by the section at the end which listed them all and what they are up to now. I have to say I remember very few of them. Plus, these characters were also meant to show how much people can change in ten years and yet we were expected to believe the main characters hadn't.

There were so many other things that annoyed me about this book. The attempt to make it more up to date seemed a little out of place when the dialogue of the characters were still pretty much the same (apart from the new found bad language). Twitter and facebook were mentioned several times. There was an openly gay couple contemplating marriage. Sweet Valley losing local business to malls. Starbucks all over the place. I could go on. Nothing wrong with any of these things but it seemed like it was trying too hard to add that modern edge.

I found the story itself a little aggravating. Things turned out well more than a little too easily but then that was the way the old books were too. Funny how some things just don't change and just like old times things seemed to land on Jessica's lap. Funny how Elizabeth was managing to survive on so little in New York. Despite all that, the bad writing and the cheesiness I had fun reading it. I can't wait to pass it on to my best friend who will no doubt love hating it too.
Posted by KarenSi at 09:12