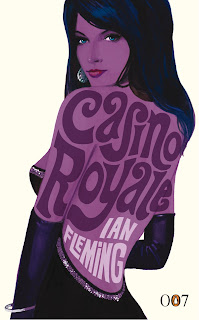 Le Chiffre is a Soviet Spy who is down on his luck. After several unsavoury business failures he is making his last bid to bring in the money and get back his power. Failure means death. He makes his last stand at the Casino Royale gambling for high stakes and so far is succeeding. The UK government would rather he failed and so send their undercover agent, 007, to bet against him. The French and American governments are of the same belief and so send Bond some back up. Unfortunately his cover is blown before he even gets there. However, Bond still has a job to do and he intends on doing it.

I have to admit that in the first chapter I had a little trouble with the language of the book. I can't quite put my finger on why but there were a few sentences that made absolutely no sense and I had to continually go back and re-read them. Either I got used to it or the language improved as that problem went away after the first few pages. I did notice that Fleming like to use the word ironical over and over which irritated me slightly. He has this in common with Doris Lessing. Like Lessing though I managed not to hold it against him.

That aside I loved the book and I am so completely surprised by that. Who knew I would love spies that much? In fact it wasn't nearly spy enough for me. Also I should probably confess that I hate gambling. I find it completely boring. Almost as boring as I find magic shows and have no interest in watching, reading or taking part in gambling games. That said I found the game exciting. I had no clue about the rules since I skimmed that part (too much detail there) but I still found myself routing for James. The book itself was dated. A little chauvinist (I really wasn't expecting anything else) and Bond came across as a petulant child at times. Still these things amused me and it fitted in with the era.

I will definitely be reading more of these books but I still find it hard to see Deaver writing in this style. Oh, and it would seem that my poor reading mojo was mainly down to my disappointment with City of Fallen Angels.
Posted by KarenSi at 23:20