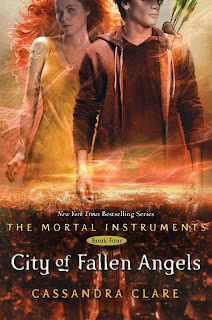 Clary, Jace, Luke, Simon and everyone else are back home in New York after the war in Idris. Clary is training to be a shadowhunter whilst her mum and Luke are preparing for their wedding. She also has Jace to worry about who seems to be pulling away from her without telling her why. Meanwhile Simon is now a daywalker and this means all sorts are after him. The mark Clary gave him protects but what do all these downworlders want? Simon is forced to realise he can't go back to having a normal life after all.

Unlike the first three books this one is mainly from Simon's point of view. Clary doesn't really have much to do with it other than worrying about Jace. I wonder if this is because there are is a surprisingly large Simon fan base. Simon did make a nice change. I did like the fact that he went from being Clary's geeky side kick to a vampire who's balancing two girlfriends.

If I am going to be honest though I wasn't all that fussed about reading this book. I thought the ending in the third book was great and that was it for me. I didn't even imagine that there was more to tell and so was surprised when this book was coming out. It honestly took about 200 pages for me to feel any sort of enthusiasm for the story and I think that was all down to Simon. I could have lived without Jace's angst particularly at the end. Almost felt that he was too full of self pity. I was also amused by the ending. Couldn't help but think of Supernatural (if you have read this and are a Supernatural fan you will know what I mean).

I don't think it was just the book though. I think I lost some of my reading mojo this week as I am finding it difficult to be enthusiastic about any of the books I am reading (other than the Iliad which I am enjoying). Plus, I have mentioned on more than one occasion that I seem to have moved away from YA. Despite that I still have quite a few in my tbr pile as well as a few series I am in the middle of and would actually like to see what happens in the end. So I am going to have a six month break away from them. Maybe when I come back to them I will enjoy the ones that I enjoyed before (thinking of Scott Westerfeld, Rick Riordan and Patrick Ness).

At the moment though I have my doubts as to whether or not I will read the next Mortal Instruments book.
Posted by KarenSi at 03:24