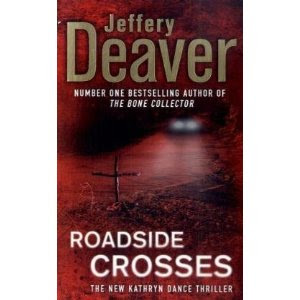 A young boy is the victim of cyberbullying. No longer willing to put up with it he begins targeting those who attacked him online. The only clue he leaves is a cross at the roadside with the date of the intended victims death. Kathryn Dance must find the boy before he actually manages to kill someone. Meanwhile her mother has been arrested for potentially assisting a suicide. Kathryn is unable to do much to help and she can't help but think that her mum may have done it.

The bulk of the book is actually about the Roadside Killer which is what the young boy is nicknamed. This is the second book by Deaver that deals with some of the scarier aspects of the Internet. In his Lincoln Rhyme book "The Broken Window" it deals with identity theft. This one deals with cyberbullying. Not just from facebook or any other social media website. Whilst those are mentioned the main source of the bullying comes from blogging. Reporter Chilton makes a post about road safety. This leads to comments by students veering off into slating the driver of an accident which become personal attacks. Both of these issues are a problem and instances of both have been seen on the news more and more. In fact I have come across horrible comments myself on various blogs and message boards over the years. Deaver clearly feels strongly about them as both these books were published one after the other. In fact The paperback of Broken Window and the hardback of Roadside Crosses came out at the same time.

I liked both these books but enjoyed Roadside Crosses just that little bit more. I think that mainly had to do with the main character Kathryn Dance. This is the second book with Dance although she does make an appearance in "Cold Moon". She's the complete opposite of Rhyme and not just because she is female. She is warmer than Rhyme, a widower with two children and lots of close family and friends that she relies on heavily. She has interests out side of her field of work. Mainly her love of music and runs a website with her best friend. She also relies on her ability to read people and witnesses to solve crimes. Something that Rhyme scoffs at as he believes that people are unreliable and it should all be about the evidence. In fact Dance's speciality is reading people and she has been trained to do it and do it well. She's also fresher than Rhyme. This is only her second book so there are still new things to learn about her. Rhyme is on his ninth and his character is starting to feel a little stale (don't get me wrong I still enjoy the stories). What did intrigue me though is that when I read a little about Deaver I couldn't help but notice some similarities between himself and Dance. They both were once journalists and folksingers. I wonder if he feels more of a connection to Dance too.

I did also notice similarities between the book and a certain TV show (not the story itself). A CBI agent with ability to read people so well that some might think they can read minds. Remind you of anything? I think Deaver himself joked about it as the characters mentioned that there should be TV show about them to compete with all the CSI shows.

Overall I liked the book and I look forward to the next one with Kathryn Dance (which I believe is out this year). Like with most of his books I was kept guessing all the way through although I knew there had to be a twist in it somewhere. Plus, like a lot of his books there were actually several. If you do fancy reading one in this series you don't have to start with Cold Moon. I recommend the first one, "Sleeping Doll".

I understand his next book is actually a James Bond novel "Carte Blanche" which I am finding hard to imagine. I haven't read any of Fleming's books (which I am rectifying this week) but I have sat through the films on many occasions thanks to my mum (not a huge fan but I did like the character Jaws). It's such a different style. Am looking forward to seeing how people review it.
Posted by KarenSi at 08:56