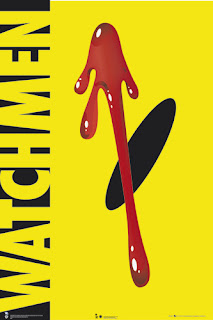 One of the original masked super heroes, the comedian, has been murdered. Most are of the opinion that it was a burglary gone wrong. Rorschach on the other hand believes that someone is out to get masked heroes. He has even taken to calling him the Masked Murderer. Meanwhile tensions between the US and Russia are high. Only Dr. Manhattan is preventing it from escalating. Upset by allegations he then disappears allowing the Russians to make their move. Rorschach, Nite Owl and Silk Spectre begin to believe the two incidents might be linked.

This is one of those very few instances where I saw the film first. Actually, I never read the books of comic book films yet I love going to see them. Rarely still I wasn't worried that the book and film wouldn't match up. Probably because of my limited knowledge of graphic novels. Regardless, there was no need to worry. I think the film was fairly true to the book. Sure there were parts missed out (I doubt that they could have been transferred to the screen) but it didn't detract from the story.

This is the first graphic novel that I have read this month that I can honestly say I very much enjoyed. It was just so much more indepth than the others. It didn't just deal with the mystery behind the Comedian's death but the whole background to the superheroes too. At the end of each chapter there was an excerpt from some written pieces about the minute men such as biographies, interviews and newspaper articles. All of these gave insight into the background and giving it more depth. I looked forward to each of these sections.

The political aspect of the story was also done well. It's an alternative history where, thanks to the Comedian and Dr Manhattan, the Vietnam war ended quickly and well. As a result of this the rest of history is different from ours and in 1985 the US is under threat from Russia. This was something 1602 tried to do, involve the politics, and failed in the end. So, I was pleasantly surprised by this one.

Another aspect I liked was that these superheroes (apart from Dr Manhattan) were really just ordinary people. Inspired by the comic books that were coming out at the time they decided to put on the masks for their own reasons. One was because he liked the idea of it and another because she wanted the fame.

As for the art work, I did like it. I especially like the larger panels as there seemed to be so much detail. There were also a few pages where no words were necassary and (surprisingly for a reader) I liked this too. I think if I was to recommend graphic novels to a newbie I would say to read this one first and don't make the mistake that I did. This has definitely renewed my interest in them.
Posted by KarenSi at 01:32