The Bonfire Of The Vanities - Tom Wolfe 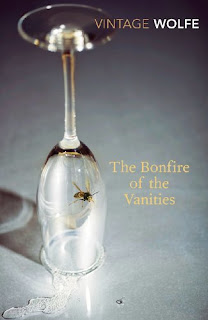 Sherman McCoy has it all. He has a Park Avenue apartment, an exciting job on Wall Street, a beautiful wife, a sweet little daughter and a sexy bit on the side. Life is good for Sherman and can only get better. He then has an accident in the Bronx which puts a young boy from the Bronx in a coma. From then on his life seems to fall apart and he could lose everything.

I honestly don't know how to describe how much this book irritated me without going on a full blown rant. I have looked at other reviews of the book and it seems you either love it or hate it. First of all I can see some positive aspects about this book. A lot of work clearly went into it and it was well written. I did like the story idea and it was the only thing that kept me going. I most definitely would not have continued with the book if it wasn't for the fact that I had to know what happened (I have managed to avoid all references to this book in my x years).

When I first opened the book it started from the point of view of Sherman. I was vaguely amused at first as he referred to himself as a 'Master of the Universe' and was very proud of his 'Yale chin'. I thought this is going to be a ridiculous character and indeed he was but it wore thin after the first twenty or so pages. By the end of the first chapter I hated the guy. I am pretty sure I was supposed to feel a little sorry for him at one point but he annoyed me so much I just didn't care anymore. If he was the only irritating character in the book I could have handled it but he wasn't. They ALL were. I realise that they are supposed to represent corruption and everything that was bad in 1980s New York but that didn't make it any easier to read. By then end of the book I was hoping they would all get what was coming to them. I hated the lawyer who was hoping to use the fame of this case in order to have an affair (he was repulsed by his wife who just had his first baby) and I hated all the characters who were using it as a method to rise in politics. Most of all I hated the Xenophobic British reporter.

There were other irritations too such as constant reminders. I don't need to be told again and again that Sherman had a Yale chin. I also don't need to be told more than a few times just how Maria pronounces Sherman. I wouldn't mind so much if it was part of the dialogue but the pronunciation followed it. Same with Sherman's lawyer who seemed to have a very strong, stereotypical New York accent. Then there were the descriptions. I love a good description but this was overkill. I think this book could have had at least 1/3 cut out just by getting rid of unnecessary descriptions.

I can see why people might like the book but it just isn't for me. Maybe I just don't have the patience (although I think I did well just finishing it). I can say this is the first and last Tom Wolfe I will read.
Posted by KarenSi at 06:19