Around The World In 80 Days - Jules Verne 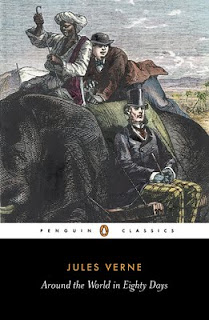 Phileas Fogg leads a quiet and methodical life. He has a routine and does not like to be broken from it. Then one evening at his Reform Club he makes the mistake of insisting that it is possible to travel round the world in just 80 days. A bet of £20,000 is made and so Fogg sets off that very night with his very surprised manservant. Little does he know that he is being followed by Inspector Fix who believes he has robbed the Bank of England and is using this bet as a cover. Manservant Passepartout must ensure that Fix doesn't upset Fogg's plans.

It's hard to like the character Phileas Fogg at first. He doesn't give anything away. Instead Passepartout does all the worrying for him whilst Fogg works around anything that might interrupt his schedule. He comes across as very cold and is reserved even for a typical Englishman (which is what I think Verne was trying to portray). It's through the eye's of those around them though that you warm to Fogg. Instead of seeing him as cold and emotionless they admire him for his collected calm. Even Fix changes his view of Fogg. The other characters are easy to like. It's hard not to like Passepartout's devotion to Fogg and his enthusiasm for winning. Mrs Aouda said very little through the book but she came across as a strong character. I even liked Fix in the end despite his determination to arrest Fogg.

I loved the book. I actually had difficulty putting it down. The chapters were short but somehow this built up the excitement of Fogg's travels. I wanted him to win and found myself just as annoyed as Passpertout when anything got in the way. Add the police chasing him without Fogg even being aware just made the story all the more exciting. The ending too didn't disappoint and I would even list it as one of my favourite endings.

Before I read this I actually had very little knowledge of the story. I knew the outline a little thanks to the 80's cartoon. I thought then that it was the reform club who had him chased round the world in order to prevent him from winning. The fact that it wasn't just made it all the more interesting. I also seemed to have watched only the episodes set in India so wasn't sure what other adventures he would have. I did have to try very hard not to picture Phileas Fogg as a lion!
Posted by KarenSi at 00:25