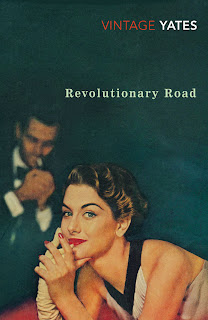 Jack and April Wheeler are living the ideal life out in the suburbs. Jack commutes into the city to work a job that he finds dull but gives him something to laugh about with friends. April stays at home with the two children and looks after their lovely home at the end of Revolutionary Road. They never actually wanted the American life but now they are stuck in a rut living the same life as the neighbours they scorn. They both try various ways of breaking out which fail. Eventually April grasps onto the idea of moving to France and talks Jack into the plan by flattering his ego. This allows them to fall in love again until something interferes with their plans.
A great book which hasn't dated in the slightest. It wouldn't take much tweaking to set the story in today's world. There are so many themes that are still relevant today. The need to conform to the ideal way of living life may be slightly different and not quiet as strong but it's still there.
The problem with April and Jack is that whilst they are bored with the ideal life they don't actually know what they want. Especially Jack. He's in a job he hates but at the suggestion of taking time out to find a job he would love his initial reaction is fear. It's only through April telling Jack how brilliant he is that he begins to believe in the idea. I can't help but feel sorry for Jack. He has such an unrealistic view of himself and the way people see him so that when things don't go the way he expects them to it throws him. April has this view of Jack too but part of the problem is that she then begins to see the man she really married.
Actually I found it to be a fairly sad book in general. These people were clearly unhappy and don't notice that the people around them are just as miserable. They believe that they stand out amongst their neighbours but in the end they were very quickly and easily replaced. I got the impression that they don't seem to know each other very well either. April sees Jack as this intellectual genius. Jack sees April as a woman made cold by her troubled childhood. Don't get me wrong, I could see the humour to it too. As infuriating as Jack could be I couldn't help but laugh at the fact that he loved the sound of his own voice. Even some of the situations he got himself into (and how easily he got himself out of them) was funny.
I really want to see the film now. I can't imagine how it has been done since a lot of it is internal monologue. I am not a huge Leonardo DiCaprio fan but I can actually see him in the role of Jack.
Posted by KarenSi at 09:14